Core Sea life has been insanely cool the last couple of days, because we’ve been going out and diving with the Department of Marine and Coastal Resources, the Thai government organization that monitors the Gulf.

They are a very kind and smiley bunch. It’s funny, because the first day we worked with them, they were really impressed with how much Thai Hektor could speak, but by the second day they were laughing about how bad the Thai he could speak was. Hektor told us he was happy though, because being made fun of is the first step to being accepted. Very wise, that man. 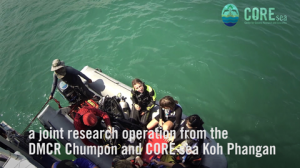 We took the Spirit of Gaia and sailed our way out into outer Chaloklum Bay. Maddi, Lydia, Freddy, and I watched as the DMCR people pulled out all of these sciencey tools. One woman had a container connected to a long skein of rope, which was connected to a machine that displayed the depth, salinity, PH, temperature, and oxygen levels of the water at whatever level the container was at. Another two women were hauling this big silver contraption that looked like a miniature bulldozer scooper out of the water. They then opened the jaws, and tons of grey mucky sludge from the sea spattered into a round green tub. Bits of projects and measurements and data were flying all around the back of the boat, and we watched, fascinated. Real science!

After they’d finished all of the measurements, the boat went over to Haad Yao, a side of the island I’d never been on before. We assembled our dive gear and placed our BCD’s into a grey zodiac, which they then drove out a little ways from the boat. We struggled into our kits and threw ourselves off the small vessel. We descended along a transact that the DMCR had laid out, and while they took pictures every meter, we followed along  behind them counting and tallying fish on our slates. The visibility was a good 5 or a poor 10, much better than the day before.

After the transect finished, Maddi and I decided to stay under for longer. We cruised the reef, pointing out cool creatures and enjoying the freedom of the dive. 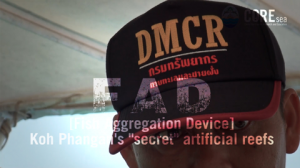 Back on the boat, I dismantled my gear quickly and packed it all away. I was filled with an unshakeable need to flip off of the boat. You can take the girl out of gymnastics, but you can’t take the gymnastics out of the girl. As I ran up the ladder to the top deck, one of the DMCR men grabbed the long string attached to the zipper of my wetsuit, so when I climbed up, the wetsuit unzipped completely. They all laughed and gave me big teasing smiles.

On the top of the boat, I ducked under the safety railing so I was standing on the narrow edge of the deck. It dawned on me, now that everyone was watching, that I hadn’t actually done a backflip in about 2 years. But my body remembered how, and in the moment just after the flip and just before I hit the water, I remembered how good it feels to fly.

On the way back to the pier, Tom talked me through film photography. He has an old Nikon with a 50 mm lens. I love film photography. Digital is great when I’m doing jobs or traveling, but there is something so beautiful about how manual a film camera is. All of the settings are buttons and levers and switches, not clicks on a screen. And it’s heavier and you can watch the aperture change. And when you’ve taken your shot and you develop the film, you’re really creating the image with all of the different washes you do. I would love to get into film.

Working with the DMCR was really interesting. Up until now, I’ve been doing a lot of measurements and transacts and fish counting, but I’ve never seen the results of all that data. Now I understand. It’s like fitting pieces of a puzzle together to get the big picture of what’s going on with this lovely patch of the world. The counting is a piece. The transect is a piece. All of these little bits of information make no sense by themselves, but when they are all combined, a greater understanding becomes a little clearer.

Today, we went to Mea Haad to do a survey on anchor damage. We need this information because then we can explain why it’s so important we have buoys in Mea Haad and at Sail Rock. I didn’t realize how much anchor damage there was on the reef until I learned how to spot it. And then it was everywhere. Huge chunks of coral broken off of rocks. You could see the fracture lines and the places where it all used to fit together. It was heartbreaking.

Nobody wants anchors dropped on the reef. The boats don’t like it because oftentimes the anchor gets caught on all the coral and it has to be cut loose, and new anchors are expensive. The conservationists don’t like it for well, obvious reasons :] 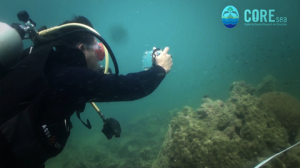 I leave the day after tomorrow. I’m sad, but I’m also ready to go. I’m headed to Bangkok, where I will be staying with Justin and his girlfriend for a couple days, exploring the city.

New adventures on the horizon!!