Why everybody should eat more seafood

Hello there, seafood-aficionado (or bored friend),

You’ve received a lot of flak from the media lately, overfished oceans, non-sustainable aquacultures etc.. But please keep in mind that this is perpetrated from the same sources as other popular hoaxes, like “climate change”, “mass extinction” and “ it won’t get better when you pick at it”

Truth is, your body was clearly designed to eat fish by mother nature. 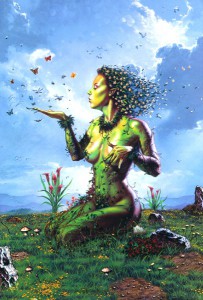 how I imagined mother nature as a teenager (source: www.iconoclastpress.com)

If there is one thing you can’t argue with, it’s that mother nature is damn smart.

Just take a look at the Universe: it’s so mind-bogglingly clever, that most physicists go barking mad after their 40th birthday. Your body has very intelligent mechanisms to break up proteins and digest seafood. Your mind is so evolved, that you can design fascinating machines to make seafood cheap and easily available for everyone.

Clearly, she had a plan.

Mother nature also has a rather sordid sense of humor, but we’ll get to that in a moment.

Let’s take a look at how food works on our planet: It’s organized in chains (actually webs, but let’s stick to the chain metaphor). In the ocean, plants create food from sunlight (primary production), then small animals (herbivores) eat the plants, bigger animals (carnivores) eat the small animals, and so on, and so on.

At the end of the chain are you and me, under normal conditions, there is nobody around anymore to eat us. 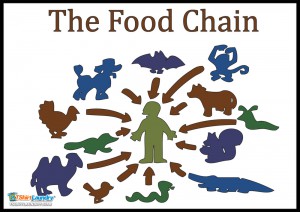 So there you have it, you’re at the top of the food chain, or the crown of creation if you need theistic justification. Don’t worry, mother nature is cool with that, she doesn’t judge, even if you don’t recycle.

But as I said, she has a pretty sordid sense of humor, and the best proof is us, Homo sapiens.

She gave us the tools to develop a really smart idea: Let’s just dump everything in the sea.

Which is so great, that even I do it all the time. Even the mercury from my energy-saving bulb, which I use to illuminate my wooden typewrite (yes, I’m pretty hip), will end up in the sea. Everything does, eventually. No big deal for us, because that’s somebody elses problem, mainly for the idiots that still live in that dump. They have to breathe it, eat it, and even absorb it through their skin. All of them. So, it kind of accumulates in the food chain. 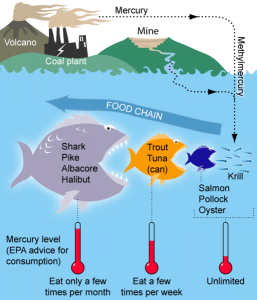 And since we, clever humans, tend to eat the guys from the higher end of the food chain, you effectively just ate the mercury of my energy-saving bulb, times 1000, just in case you enjoyed some delicious seafood previously.

Please remember this, when you lay on your hospital bed, tormented by some weird liver disease: Thank you for your sacrifice. Seriously, you’re at the end of the food chain, it stops with you. Like a chemical waste  receptacle, you took the bullet for all of us. We would build you a statue, but you know how it is, we’re all pretty busy. 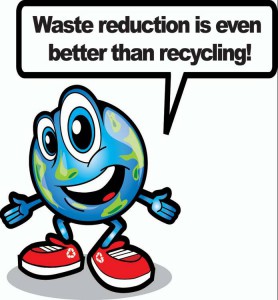 crazy earth has no clue what she’s talking about (source: www.amherstma.gov)

Friends and volunteers often ask me why I don’t eat seafood, it seems strange to them, as I am a part time marine biologist. But let me ask you a question: Do you know any Zoologists that eat lions? Proctologists? The first one to make a Gynecologist joke, will get his brain washed with acid.

I don’t eat fish because it makes me puke. Even the smell makes me retch. Instead I smoke. For religious reasons. Because “every cigarette brings me 5 minutes closer to Jesus” (Anonymous source).

But, I’ll consider giving it up tomorrow. I promise.