A lot of nutrients can be bad for slow growing corals. Their “arch-enemy”, algae, love it and they use it to grow even faster than usual. Like weeds in your garden they will overgrow everything, including our precious corals. Which means no shelter, food and other interesting things for fishes and other creatures. Most of them like corals better than algae, just like most of us.

We thought more tourists visiting the beautiful islands in the Gulf of Thailand would mean more nutrients for the surrounding reefs (“it stands to reason”).

And no, there is no real waste water treatment. Fortunately for you (and everybody’s beer consumption) there was no clear correlation (a fancy mathematical move to relate two things which have little in common – often used by desperate scientists to make sense of their non-intelligible data) between you “dumping” into the ocean and bad water quality. 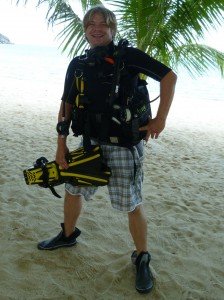 Water quality around the islands is not exactly great, but not a worry at all, at least for humans.

The islands in the lower Gulf of Thailand are a renowned diving destination with a steady flow of visitors arriving since the 1990ies. The result is an increasing amount of untreated sewage, rich in inorganic nutrients, entering coastal waters and threatening local reefs. Nevertheless, only a few studies have been conducted on the effects of tourism on local reefs in the area. During the sampling campaign from February to April 2011, six sampling sites along a gradient of tourism impact were selected, with highest tourism numbers found on Koh Tao, followed by Koh Phangan and the uninhabited Ang Thong National Marine Park. As part of a larger project focusing on environmental parameters affected by tourism, in this study parallel data sets were created for Chlorophyll a, as an indicator of increased nutrient concentrations, and for the benthic community composition and diversity. We hypothesized that water column Chlorophyll a would be higher in bays with higher tourist densities, resulting in changes in reef community composition and diversity. Chlorophyll a concentrations, locally and on a regional scale, showed strong variability whereas differences in benthic community composition were more pronounced between the individual islands. Seasonal variability in chlorophyll concentrations was not equally distinct at all bays, although a trend towards decreasing levels was found. Moreover, the results of some bays may be confounded by a storm event in March 2011, preceding the low season sampling campaign. Solely observed, tourist number alone failed to explain differences in coral reef community composition and Chlorophyll a concentrations, as there assumingly are overriding factors such as the weather conditions, hydrodynamic regime or bay topography. Nevertheless, this study, in cooperation with simultaneous complementary studies in the overarching project, provides a first comprehensive data set on important environmental parameters, as well benthic community composition and fish assemblages.