As part of my diploma thesis, I joined the CORE-SEA-Team from February to May 2011. Rapidly increasing tourist numbers in the area of the lower Gulf of Thailand, accompanied with water pollution, overexploitation of marine resources and disturbances by dive activities, are expected to influence the composition of coral reefs significantly. Sewage water of hotels and resorts is discharged directly into the ocean, thereby potentially polluting reefs permanently. The increased demand of fish by tourists results in the overfishing of local coral reefs, often accompanied with destructive fishing practices. Moreover, the elevated dive activities, especially around the coral reefs of Koh Tao, are causing long-term disruption in reefs. 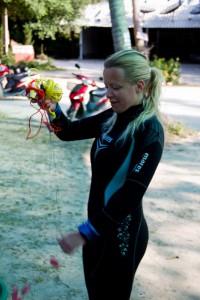 My thesis investigated the changes in species composition of herbivorous reef fishes and sea urchins in disturbed coral reefs as well as their impact on the algae composition. Specifically, I tested the hypothesis that high abundance of tourists causes low occurrence of herbivores in the adjacent coral reefs. The decline of herbivorous fishes and other keystone grazers like sea urchins has been identified as the leading cause of increased algal abundance on reefs, which negatively affects the growth, reproduction, and survivorship of the corals. Six different coral reefs around the islands of Koh Phangan, Koh Tao and the barely populated Ang Thong National Park were surveyed, counting the abundance of all occurring herbivorous fish species and sea urchins along a 50 metres long transect line (UVC Method of Reef Check Program). Additionally, the total number of carnivorous fish species was recorded to analyze differences of total fish abundance between the sites. Based on countings of resorts and bungalows along the beach, sampling sites were classified as under “high”, “intermediate”, and “low” influence of tourists. For more precise information about the present tourist number, hotel owners and workers were interviewed about the actual capacity utilization of the resorts on sampling days. Additionally, people on the beach were counted instantaneous after the actual surveying. To estimate the influence of fishing activities on fish species composition, fishing boats along the sampling bays were counted on survey days.

Additionally, changes of species richness during high season from February to March and low season from April to May were investigated conducting surveys in both seasons on the three study sites of Koh Phangan. 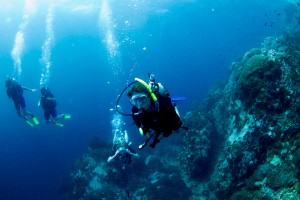 Scientific diving in the marine park

These descriptive studies were linked with experimental in situ studies, using cage experiments in order to simulate extreme overfishing and following disappearance of benthic or pelagic herbivory. Different cage designs were used to test the effects of exclusion of occurring herbivores on algae growth. Three replicates of closed, semi-closed and open cage designs were deployed on one study site of Koh Phangan. While the closed cages excluded both the herbivore fishes and sea urchins, the semi-closed ones with an open top were used just to prevent the sea urchins from feeding on the tiles, whereas the fishes could enter the cages from above. The open cages were acting as controls, giving both the fishes and the sea urchins the opportunity to feed on the algae growing on the tiles. Cages were placed in identical water depth of 5m on dead corals or stones in the reef to ensure that living corals were not threatened. Every cage was equipped with 12 tiles, each having a size of 2×2,8 cm. Wire of the cages (mesh size 2,5 cm) was cleaned once a week by a steel brush to avoid overgrowth of the cages and consequential lack of light inside, potentially leading to negative effects on growth on the tiles. Biweekly from March to June, one random tile was removed from each cage to analyze algae growth on it. However, the cage experiments couldn`t reveal clear answers of herbivory effects on algae growth, as some cages were repeatedly destroyed and the survey period was too short for expressive findings.

This study was linked with further analysis of water, sediment and benthic community at identical reefs. Several results of these studies were considered at the interpretation of own results to gain a comprehensive data set about the condition of surveyed coral reefs. 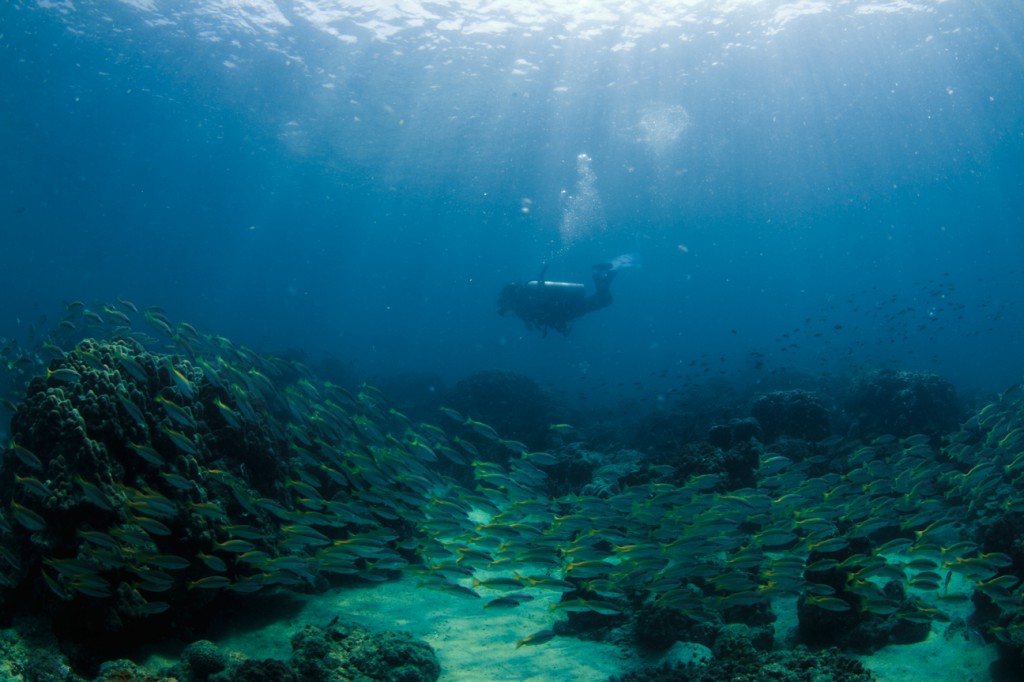