After we posted the article about the history of the Gulf of Thailand (read here), we were asked a couple of very good questions.

The questions are quite fundamental and philosophical in nature, but let’s see if we can get them sorted.

When were there 100% living coral the last time? Or what is an appropriate percentage of living coral, if this can be stated?

This is addressing a problem we refer to as shifting baselines.

Please don’t look down on me but here is a quick and dirty quote from Wikipedia:

“A shifting baseline (“…”) is a type of change to how a system is measured, usually against previous reference points (baselines), which themselves may represent significant changes from an even earlier state of the system.” (http://en.wikipedia.org/wiki/Shifting_baseline, 07.03.2013)

There’s a whole blog-universe about this phenomenon, if you want to indulge take a look here (make some coffee first, I’ll have mine with frothed full-fat milk and a double shot of espresso, thanks. Ok, instant is fine, do you have cow milk?).

So far so good?

What does that mean for us strapping young environmentalists? 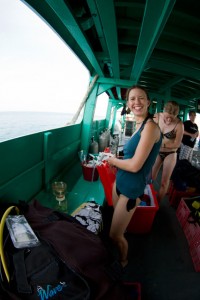 To simplify, let’s just say that no person alive today has ever seen an ecosystem unchanged by humans. Simply because humans have been around for some 2.3 million years (sorry, Creationists).

This leaves us with a lot of guesswork on how an untouched system could look like, so here’s what us clever crowns of the creation do instead:

Every fresh generation on planet earth just pretends that everything is as it should be when they arrived here, disregarding any previous havoc that was wreaked by their predecessors.

Too simple? For sure. Here’s the good book:

Do you have a chart of the decline in living coral over of a few years time?

Of course we do (we’re scientists, we have charts for everything), take a look at this one: 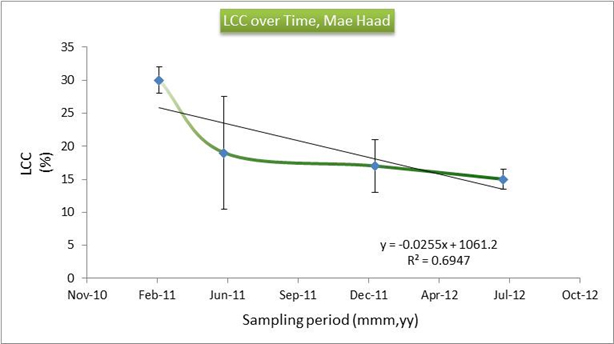 Is there an appropriate absolute number of living coral per square meter or something for a healthy ecosystem considered?

Keeping the shifting baselines problem in mind, science came up with a system to classify reef ecosystem health, based on the percentage of living coral absolute, or per area (also called Live Coral Cover or LCC).

How many living coral are there in regards to this absolute number for a healthy ecosystem (if there is one)?

You mean on Koh Phangan, Samui or Tao? Our ecosystems and it’s stressors are so diverse, that it’s difficult to come up with a number, but it ranges between 14% and 25% living coral cover,depending on where you look. In the marine park, our only marine protected area? Up to 40%. 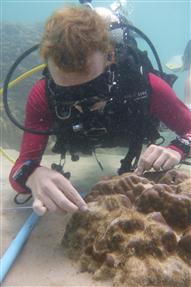 So how much coral should be there, relatively or absolute to consider the ecosystem to be healthy?

Well that’s simple. Take a look at that chart and you will see that  just 51% Live Coral Cover is considered “good”. Unfortunately it’s not as easy as that (got you there).

We could restore the ecosystem to 100% Live Coral Cover, by sort of cloning a single coral a couple of billion times (don’t smirk, we can do that) and replanting them on the reef.

But we would end up with zero bio-diversity and zero resilience in our synthetic little ecosystem.

Hold on, that sounds a bit complicated, so what does that mean?

Biodiversity is nearly impossible to define, but let’s just call it the variety of living things in a given area (a reef, or a forest for example) for now. A community of many different animals and plants is highly diverse, a community of only one type of animal or plant, has no diversity at all (a monoculture for example).

Every species has a different approach to cope with threats, stress, food, sex etc. (that’s what we usually consider having a life), so  having only one approach to deal with life is probably not a good idea, right?

In fact, if the right stressor comes along (how about a new one, invented by us humans), we can observe complete non-diverse-systems being blown off the face of the earth, because they have zero resilience.
[hr top]

Can this be stated (as a target for conservational activities)?

No, but it can be discussed. By all of us. C o n s e r v a t i o n kind of implies,that we only try to keep what we have left. Human society has to agree on “how much nature can we afford to lose”, and for how long we want to continue shifting baselines. 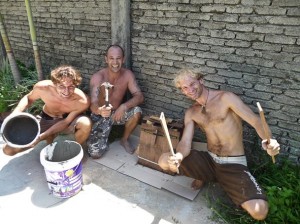