In 2012 I had the pleasure to spend 4 months on the beautiful island Koh Phangan in the Gulf of Thailand, to enjoy the stunning under-water-world, hang out on tropical beaches, meet awesome people, eat looooots of good Thai food, get cheap massages… oh yeah, and to conduct the fieldwork for my Master thesis.
My supervisor Prof. Christian Wild from the Leibniz Center for Tropical Marine Ecology in Bremen told me about CoreSea and the research some students did the year before (read the blog-posts of Hauke and Susanne). From their results it was visible that the coral reef ecosystems around the island were affected by human influences in comparison to the nearby Marine National Park in terms of fish abundances and live coral cover. We, a group of three students, now were interested to find out how the anthropogenic stressors overfishing and eutrophication can influence the functioning of the coral reefs on Koh Phangan. 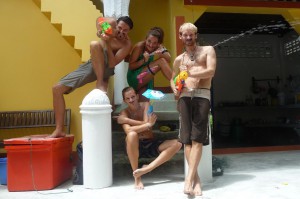 How the scientific community looks on their day-off 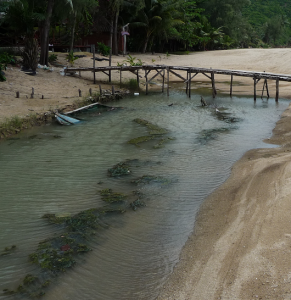 Overfishing is a big problem in South East Asian reefs, and in the Gulf of Thailand in particular, as local communities largely depend on fisheries for food and income. As fisheries management is often inadequate, lots of species are fully fished or overfished. Especially the removal of large algal-grazing fishes decreases reef health, asherbivores (the vegetarians of the fish community) play an important role by limiting the establishment and growth of algal communities (= top-down control) (Green & Bellwood 2009). From the other end of the ‘food chain’, algae are promoted by high nutrient concentrations in the water (= bottom-up control). Additional to natural nutrient concentrations, large amounts are introduced from land. As many coastal communities and hotels in South East Asian lack effective water treatment facilities, wastewater is often discharged untreated into the ocean. This wastewater contains high concentrations of nutrients and act as fertilizer for reef algae. In a nutshell, there is an ongoing competition for space in a reef between corals and algae, and fishing of herbivores as well as the addition of nutrients will tip the balance in favor of algae. There have been numerous studies on the relative importance of the stressors overfishing and eutrophication on coral reefs, but the results are highly variable and depend on region 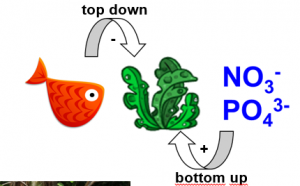 Top down vs bottom up

or groups of algae and herbivores. Southeast Asian reefs have hardly been studied in this regard, although they have been classified as the most threatened reefs in the world with overfishing and pollution as major threats (Wilkinson 2008; Burke et al. 2012).
With my Master Thesis I wanted to find out which on is the more important factor influencing reef algae growth on Koh Phangan’s reefs. At the same time, my colleagues Soureya and Pepe looked at responses in sediment parameters and invertebrate recruitment (baby corals, baby worms, …) to the same stressors

To find out how anthropogenic influences alter these parameters, we constructed colorful set-ups from blue and yellow pipe and equipped them with terracotta tiles serving as settlement ground for algae and invertebrates. We simulated the stressors overfishing and eutrophication in these mini-ecosystems by wrapping some of the frames in fishing net (mesh size 2 cm) to exclude fish, added nutrients by deploying bags with slow-release fertilizer, or applied a combination of both. We deployed our set-ups along the outer reef edge in Mae Haad, our office for the following months. 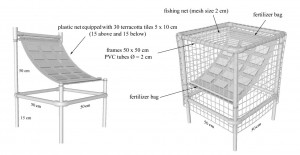 Every week over a period of 12 weeks we sampled tiles from each set-up and sediment from below to analyze them in the CoreSea laboratory. First I incubated the algae settlement tiles in glass jars within coolboxes for an hour in the light as well as in the dark to find out how much oxygen the algal community on it can produce by photosynthesis or use by respiration. After this I took a picture of each tile to later analyze the % cover of different algae growing on the tiles with the help of the software CPCe 4.1. Then I scraped off all the algae from the tiles with a razor blade to collect the algal biomass in little tinfoil packages which we later dried in our self-made solar driven oven (This was honestly the least fun part of the week and I am happy I had help from my colleagues and lots of audiobooks on my computer). The dried algal samples were taken back to Bremen, ground to powder with mortar and pestle and analyzed for organic Carbon and Nitrogen content.
Besides working with tiles we conducted benthic-, fish- and invertebrate-surveys as well as feeding observations on the cages at the study site to evaluate benthic community composition and to quantify the influence of herbivores. As the bay Mae Haad has a little river seeping through the sand into the ocean, we suspected the introduction of nutrients by this source and therefore analyzed water and sediment parameters from 6 stations along a transect from the river to the outer reef edge where our set-ups were located. We measured phosphate concentrations and water as well as sediment chlorophyll a, indicators for eutrophication.

Results showed that nutrient enrichment neither influenced algae dry mass, algae cover, organic Carbon, Nitrogen content nor oxygen fluxes. Herbivore exclusion on the other hand had a significant effect on algae dry mass and organic Carbon and resulted in phenotypic differences in algal community. All tiles in all treatments were dominated by small, filamentous turf algae. However, caged tiles showed less dense fouling and 3-4 times taller turf algae compared to dense but very short turf algae on uncaged tiles. From week 7, small individuals of fleshy brown macroalgae were growing on caged tiles. Combined effects of herbivore exclusion and nutrient enrichment were negligible as caging effects dominated all response parameters. Temporal changes were evident in algal cover, dry mass, N and organic C content on settlement tiles, all increasing significantly over time. Whereas biomass and cover was highest in herbivore exclusion treatments in week 10 with a 5 fold increase in algal dry weight compared to control treatments, nutrient enrichment led to highest biomass values in week 12 with a 2 fold increase in algal dry mass compared to controls. 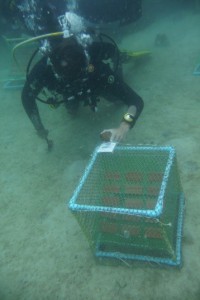 Analysis of water and sediment parameters on the river-ocean transect revealed 10-times higher concentrations of phosphate and significantly higher water and sediment chlorophyll a concentrations in the river water. This proves that the river is a source of nutrients and organic material to the bay which likely influences reef functioning. Besides the effect of eutrophication on algae growth, nutrients are a problem for reefs by reducing calcification rates in corals (Ferrier-Pages et al. 2000, Fabricius et al. 2005) and increasing the abundance of microorganisms eroding the reef substrate (Holmes et al. 2000). Accordingly, the observed coral cover of 20 ± 4 % was rather small compared to the majority of reefs in the Indo-Pacific. Although macroalgal cover in the reef was low during the study time (4 ± 6 %), high turf algae cover in the reef (42 ± 6 %) indicated elevated nutrient concentrations in the bay, as these fast growing algae benefit from high nutrient concentrations. The abundance of sea-urchins and fish biomass in Mae Haad (0.002 ± 0.003 ind. and 0.137 ± 0.040 respectively) were low compared to a nearby Marine Protected Area or average values from the Indo-Pacific. This indicates that the reef in Mae Haad already impacted by overfishing.
From the study of similar experiments I expected much larger responses of algae biomass to nutrient enrichment and herbivore exclusion. Whereas in other studies the biomass in caged treatments was elevated 300-fold compared to controls (e.g. Jessen et al. 2013), an increase by 5 fold seems quite small. This effect was due to the fact that even in open control plots, the algal biomass on tiles was comparatively high. Obviously, the herbivorous fish community of Mae Haad was not able to control the establishment of algal communities on the substrate, although they prevented growth of macroalgae on open tiles. Furthermore, the lack of responses to nutrient enrichment suggest that ambient nutrient concentrations already satisfied algal growth so additional supply did not have an effect on algal parameters 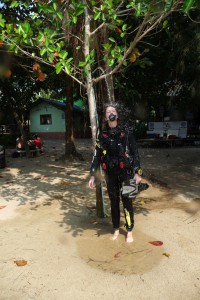 Clearly the reef in Mae Haad is already impacted by both overfishing and eutrophication. Effects of herbivore exclusion on algal parameters was larger than effects of nutrient enrichment, which is why I concluded that herbivory is the more important controlling factor of algal growth at the study site. Management plans to improve coral reef health should always focus on the key controls of ecosystem functioning at a local scale. For management plans this would mean to first strengthen the status of Mae Haad as marine protected area and reinforce the existing fishing ban. Additional efforts should be made to reduce the input of nutrients from land via the river.