The state of eutrophication and overfishing in the Samui Archipelago, lower Gulf of Thailand

The Gulf of Thailand is a “peculiar” little body of water. It’s young, shallow, and nearly closed off. Read more about here.

One important fact is, that rivers export nutrients into the Gulf and the currents transport them to the coral reefs. Some of them originate in your bathroom, but most of them come from factories, like industrial shrimp farms.

These nutrients do two things: they help plants (Algae) grow on damaged corals, and can exclude them from the playground of the seabed, and they damage corals.

Plant eating fish (Herbivores), feed on these algae, and in a healthy ecosystem, they keep algae and coral in balance, which is great, because both are equally important for an ecosystem’s “functions“.

If we remove too many of these fish, say by eating, we disturb this balance. Which can have a consequence: less fish globally, and a lot of hungry people.

It’s important to note, that the fishermen you might see on our beaches are artisanal fishers, which is, by definition, sustainable.

The Samui Archipelago, situated in the lower Gulf of Thailand (GoT), is highly valuable to the Thai economy. Every year, up to 21 million visitors are drawn to Thailand’s beaches and coral reefs, resulting in approximately 30 billion U$ or 985 billion Thai Baht of annual revenue. After the 2010 Mass Bleaching, the reef ecosystems of South East Asia showed alarming coral mortalities and high algae cover. 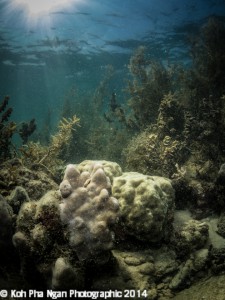 Because the GoT is notoriously under-investigated, we studied the status of coral reef health and overfishing from 2011 to 2013. We could show, that the live coral cover in the only Marine Protected Area (Ang Tong National Marine Park) of the Samui Archipelago is significantly higher (data) and healthier than on Koh Phangan or Koh Tao, which are two major tourist attractions of the area. Additionally, we could show that the fish stock is significantly healthier in the MPA than around non-protected islands (data).
[hr_invisible] 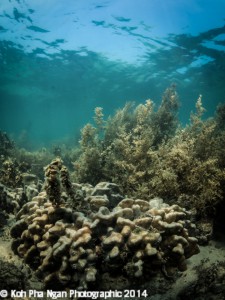 When plant_eating fish (herbivores) are removed, algae can overgrow coral

The high turf algae cover, and low numbers of herbivorous fish, imply a eutrophied, overfished system, but measurements of chlorophyll a and nutrients showed no significant differences between protected- and non-protected areas. We expected a clearer correlation of nutrient availability and substrate status, but we found indications of a significant nutrient source from the main land. The only MPA in the Archipelago seems to be effective, even though it is not perfectly managed and we do not fully understand why, and how it works.
[hr_invisible] 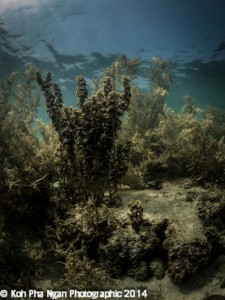 When many nutrients are available, algae proliferate and corals have problems (Phase shift)

Therefore, the authors suggest that the efforts of understanding the roles of bottom-up vs. top-down control in the Gulf of Thailand need to be intensified, so decision-makers and stake-holders can make the right decisions for the conservation of these economically and intrinsically valuable gems.
[hr_invisible]

We have a plan to ease this situation. It’s pretty big,